I was multitasking today, and while I made the effort to pay attention, unfortunately the whole endeavor was a loss. I’m not entirely sure what I accomplished, and I hardly know a thing about what I missed. I know it is not a productive thing, and yet, it is so hard to resist. There is always more to do, another email to respond to, another crisis, another report, another job posting to write.

Tomorrow, I have a chance to redeem myself. Can I disengage, focus entirely on a screen and learn something? It is what we have expected of our students this whole past year, but now I find my tolerance greatly diminished. Tomorrow, I will demand of myself, attention, focus. Make the most of an opportunity. Discipline.

This weekend I played the last gig I had on the books. It was one of a small flurry of gigs that were arranged in that window when it seemed like everything was going back to normal.

We played outside in front of the Montague Common Hall. The first part of our show was punctuated by the fragrant smoke of moths flying into the halogen work light that served as our stage light. We switched it out for a quieter incandescent lamp and continued without any more loss of life.

The thing about playing outside, at night, in front of lights, is that you really have no sense of who is out there. There might be three people, there might be twenty people, but it didn’t really matter. We were playing music out into the world and it felt good. People clapped. Across Montague Center, people stepped out from their homes, curious about the music. Someone called my name. I smiled out into the darkness. I had the spruce-like smell of bug spray, and the acrid smell of burnt moth lingered in the nose. Occasionally, a loud car drove by. And once, after we finished a song, the church bell tolled out the time.

I could imagine a life where I did that every night. Set up a web of extension cords powering fans, amplifiers, lights, and pedalboards, and with a couple of friends, play out into the darkness. I felt lucky. I don’t know when we’ll get to do that again.

Pleasure is so fleeting. And yet to remember just two nights ago, I can feel it still. How nice it was to wind our way through an orchestrated score, a weave of patterns, and to land the final chord like a gymnast landing solidly on two feet with nary a waver… or maybe just a little waver, but still… nailed it. 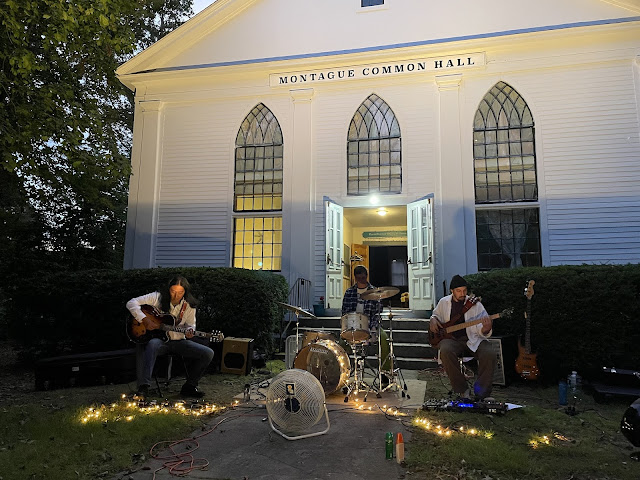