Before leaving for college, I wanted to have an experience with my younger brother. I hoped it would be a time for me to pass on my worldly wisdom before leaving home. I don't remember what started me believing I was a backpacker, but I had an external frame pack, the kind where you lashed sleeping bags and tents to it like the roof of a Pinto and I was determined to take my brother camping. Starting in Lee we were going to get on the Appalachian Trail for a couple day hike and see how far we could go.

This was, of course, before the time of cellphones and Google Maps. And I, of course, had an over inflated sense of direction and way finding. We set off with only the vaguest sense of how we would meet up with the AT, but surprisingly, after meeting up with the highway, I was able to navigate our way to the trail. Unfortunately, the misdirection cost us several hours, and later that afternoon it started to rain.

Somewhere down the path, I knew there was a trail campsite, and I hoped a shelter to duck under, but as we continued on for several miles it grew darker and the rain fell harder. Climbing the side of a mountain that rose up into the darkness for an indeterminate distance, I decided we needed to make camp.

I had a little two person pup tent, the kind kids used to have for sleep overs in one's back yard. It was a flimsy thing in the best of times, and we were in miserable shape trying to raise it in the pouring rain on the side of a mountain. I was constantly cursing myself and in an utterly foul mood trying to stick stakes into the ground and run guy lines. My brother was surprisingly complaint and follow along with my lead. I decided we would sleep with our heads facing up hill and set the tent up that way with the opening also facing up hill.

I was so embarrassed with my utter failure of brotherly wisdom and guidance. I felt like the whole debacle was a demonstration of my ineptitude. I can't remember if we talked, I had imagined a whole speech I would give him about staying true to his own path, to not follow my mistakes, to drink and drug responsibly, and that kind of thing. But, I'm not sure I had the wherewithal to share it, and we were both so exhausted that we fell sound asleep.

When we woke in the morning, the rain had run down the mountain trail, right under our tent door flap. While we slept with rain landing on our faces and running under our sleeping bags, it all collected at our feet, which were now dunked in a foot or two of water. Thankfully, the morning was clear and sunny, but that was little consolation as we extricated our pruned selves from the cold waterlogged sleeping bags and tried to release the tent, which collapsed and tore from the hydrostatic pressure on the walls of the cheap polyester.

While the utter collapse of the tent was welcome, our cotton stuffed sleeping bags had swollen to misshapen proportions, and regardless of how much we sat and stood on them, they had each gained an additional ten to twenty pounds, it seemed. We hiked on under extreme duress. My attempt at creating brotherly connection became an endurance test to see if we could make it out intact. Eventually, my brother's pack was too heavy for him to go any further so I strapped his sleeping bag onto my pack and we continued on that way, my waterlogged load a kind of penance for bringing my brother along on this epic journey.

The morning was so sunny and hot, we ran out of drinking water and refilled our flasks from a murky stream. I should have known better, but we needed something, anything to quench our thirst. We were desperate and looked like hell. Just a little ways further we found the campsite I had been shooting for the night before. We collapsed on a platform and finally broke out our meager breakfast. We ran into other AT hikers and they marveled that two such young people were on the trail. As much as I could, I let their assumptions go unchecked. They didn't need to know that we had only been on the trail one night and it was just about all we could take.

Eating breakfast on a sunny morning in the company of friendly hikers did wonders to our spirits. We spent most of the day resting and laying out the sleeping bags to drip and dry. Finally, as the day drew on and we began to get hungry again, we rolled the sleeping bags back up and remounted our packs. This time we went the direct route, and it was only a short hour or so hike before we were in familiar territory and walking up the driveway to my parent's house.

I think we were both trembling from the exertion of carrying water soaked packs, but also exhilarated to have made it home, to have survived without murdering or abandoning one another somewhere in the Berkshire hills.

It has been years since I've last been camping, back when my kids were little and we used to car camp on the way to Tennessee. I still have the yearning though. Tucked into one of the eaves is a sleeping bag I picked up on sale one year, still in its cardboard box. Similarly, I think there is a brand new tent sitting on a shelf in the basement. My old frame backpack, my painfully uncomfortable companion for so many journeys, is now long gone, I am sure. Maybe someday, as old men, I'll see if my brother wants to go camping again. We'll check the weather this time, and maybe we'll find a site with a nice lake or ocean view. I'll tell him about being true to one's self and how he shouldn't listen to his older brother. And then I'll tell him about going easy on the drinking and drugging and then we'll lean back in our camp chairs and crack open a beverage or something like that and watch the evening draw across the sky. 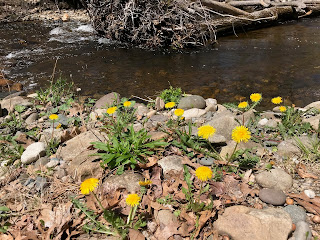 Painted Tigers This morning, my father forwarded me a collaborative video done by the Boston Symphony Orchestra while quarantined at home. You may have seen these videos if you are on social media, and my own trio, Vimana, did one recently, but I've never seen one at the scale of compiling all the independent footage of an entire symphony. And suddenly there are dandelions by the river! If you are not aware of the technological limitations, it can seem like a magical union of collaborative musicianship, but we have all been experiencing the latency and jitters of limited bandwidth and Zoom, so we know the impossibility of that with current technology. Instead, what happens with these videos is that each musician plays and records the entire piece independently in their own home, hopefully all at the same tempo, and then the recordings are sent to a video editor who, like a conductor (or in this case, perhaps in conjunction with Keith Lockhart) matches the tempo of each of t
Read more