It is funny the things that imprint in our brains, like the material used for a bedsheet, which I seem to know is hand sewn for some reason. Or the cutouts on a laundry basket in that enduring 1970's flower motif that was present in everything from non-slip bathtub treads to car decals.

I have been thinking about brothers, and the responsibility brothers have for one another. I don't think I was always the best model for my brother. If anything, I modeled how to be unruly and rebellious. As a kid I basked in immediate gratification and struggled with waiting. My brother was always sweet and cherubic and paced his pleasures. That's what made me want to give him Charlie horses on the way to church in the back seat of the car, or once when my Aunt Mi-Suk took us for ice cream in her Camaro, I pushed his ice cream cone into his face because he was eating too slowly and I must have already finished mine.

Somehow, despite my influences, my brother intuitively knew how to save up and have the long vision for the things he wanted. Nowhere was this more evident than in his collection of Bazooka gum comics. I don't know if Bazooka gum still exists, but they were little rectangles of very hard gum dusted with powdered sugar and wrapped in a miniature wax paper comic. I remember nothing about the comics and never found them noteworthy, but there was the promise in one small panel of the comic that one could mail in a certain number of comics and receive something amazing like x-ray vision glasses, secret decoder rings, and the like. Each item required something unobtainable like 500 comics. While I could imagine all kinds of escapades and adventures I could have with x-ray vision glasses, I could not imagine the wherewithal to save and keep track of 500 little rectangles of Bazooka comics.

My brother, however, very quietly, over what must have been years, amassed a tremendous collection of Bazooka comics in a little box. He didn't even know how many he had. I remember getting angry with him as I sat and counted out his collection for him. He had far more comics than he needed for any of the items I imagined mailing away for from a post office box in Brooklyn, but he wouldn't part with any of them. By that point he had grown far more attached to the comic collection than the idea of a pocket knife, spy camera, or monogram bracelet. It was like Bert's bottle cap collection on Sesame Street. To send away 500 comics from his precious collection seemed like something that would wound his very essence of being. I, on the other hand, was desperate to own a pair of x-ray glasses or a spy decoder ring.

I don't recall if he ever mailed away for a prize, but I am certain that nothing he would have received in a self-addressed stamped envelope would have equalled the pleasure he received from looking at his Bazooka gum comic collection. This same kid would go on to work all summer in a local pharmacy to save up for a very expensive pair of fashionable leather boots. I worked all summer at a gas station, and between my trips to McDonalds, ice cream shops, and rock concerts, don't think I had saved up more than a handful of Bazooka comics, I mean dollars, at a time. I did have a cool Paul Simon Graceland t-shirt that I wore until it disintegrated.

Somewhere in my parents' house, I swear there must still be a swath of that yellow sheet fabric that has been repurposed into a pillow case, or something like that. I can almost feel the texture of the material against my cheek and it is nothing like the commercially available sheets at Target or Amazon. It is something that was selected and worked until it matched my mother's accurate vision. She, like my brother had the long game in mind. Perhaps even in 1977 she envisioned, through her hard work in picking out the perfect material, sewing the seams, and fitting the sheet to the mattress, that this object she was creating would exist forever in her family, if not in its physical presence, then in its memory, the color, the coolness on the cheek, in the sensation as it was drawn over a body in the cold of winter or hot days of summer.

I think my brother has mostly forgiven me for my more brutish days as a big brother and more than once he has helped me out as brothers and sisters sometimes help one another out when one brother gets divorced and has three kids and has no more Bazooka gum comics left. I'm lucky to have him as a brother, and maybe part of the reason he can be so cool and stylin' is because I helped show him how, and he just took it to the next level.

Take care and be well, and watch for your brothers and sisters old and small, 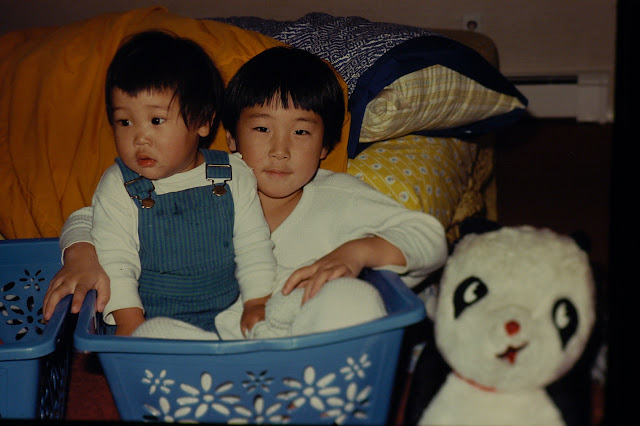 From the Korean Cultural Center:

Samgyetang: Korean Ginseng Chicken Soup Across Generations
A Free Online Streaming Event
Sunday, June 27, 2–3 p.m. ET
Part of the Smithsonian Folklife Festival
Ginseng is known and used in many ways by Korean and Korean American families. In this program, Korean American chefs Yesoon Lee and her son Danny Lee—who separately own and operate several popular restaurants in the Washington, D.C., area, including Mandu, Chiko, and Anju—will prepare and talk about one beloved dish and its significance to the Korean American community.
Samgyetang is a traditional Korean ginseng chicken soup which is eaten for its rich flavor and healthful properties in the heat of the summer. Yesoon will prepare a more traditional version of the soup, while Danny will prepare a contemporary take on the dish using his mother’s samgyetang, similar to a dish he serves at Anju. They will discuss the tradition behind the soup, their own cooking experiences, and how Korean Americans use ginseng in other ways. Folklife researcher Grace Dahye Kwon will moderate the conversation.
DETAILS & REGISTRATION HERE

Throughout Massachusetts, people are coming together to provision and protect vital resources and, in the process, they are building institutions and strengthening communities through commons organizations. Now, for the first time, a multi-disciplinary team of graduate and undergraduate students from the University of Massachusetts Amherst have taken an inventory of such efforts and have published a digital magazine detailing the histories and benefits of 11 commons initiatives in the Bay State.

From Facing History and Ourselves: