I've been in a workshop on transformative racial justice these last two days. One of the reoccurring themes has been the power of narrative. I think this comes across on multiple levels. On the most personal level, it is the way the smaller breakout groups have fostered a sense of community. By sharing stories about ourselves, we are negotiating social spaces with different ground rules and expectations than one typically finds in a Zoom room. We are challenging each other with how brave or honest we want to be, and in so doing set the tone and expectation for others. It has been a really wonderful experience and the strongest sense of community I've found in a workshop since arriving at the University. This particular workshop has the benefit of time, we are meeting in large day-long and half-day chunks, nevertheless, the other people in the institute have been willing to stretch and extend themselves into the space in a way that feels honest and earnest. It feels like we are building a relationship.

It is interesting that building this kind of relationship, particularly condensed over the course of a few days, makes one realize what we have missed since being mostly remote, and for me, since arriving at a new institution entirely remote. Almost everything that is done over Zoom is transactional, but it is the rare Zoom session where one engages at a deeper level and gets to know the person you are talking with. Even more so than in person, a Zoom meeting must be intentionally constructed to foster community for that to occur, and it takes time. 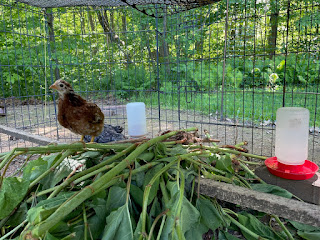 Each morning, I've been taking the new chicks out to the chicken yard. They are in a separate enclosure for most of the day that we call the octagon, but at the end of the day, before they are brought back inside, they are allowed to roam freely. The two big hens have differing approaches to interacting with the chicks. One seems curious and almost can't help herself from coming close and investigating. She will herd the chicks to stay in her general proximity. She is intensely curious about what they are eating and I've only seen her peck at the chicks once.

The other hen is much more interested in the chick feed that has spilled inside the octagon. She will go in there and peck at the dropped chick feed dust and not give a second glance at the chicks hopping all around her unless they get too close and bother her concentration, then she will peck at the chick and send it squawking away at top speed.

Theoretically, at the end of this week the chicks will be old enough to transition into the coop. I'm not sure they have quite figured out their relationships with each other yet, but one can see them forming. The chicks are developing personalities. They are figuring out how brave they are, who leaps out of the cat carrier first, who will climb up on roost and flap her wings, and who will nestle under the knotweed I've laid in the enclose and create a nest.

They have not yet made a relationship with me. The hens will come running when they see me step out of the house and come around the corner. They are hoping I'm bringing treats. For the chicks, I am just a giant hand being all grabby and frightening after a nice day of playing outside. I wonder how long it will take to build up that trust.

Clearly, even as I try to stay detached from the chickens, because they are fragile creatures, I have become attached to them, they are pets with benefits (eggs). I enjoy how talkative they are and I always thank the hens for an egg when they leave one for me, and I tell them to have a good day after I sprinkle food scraps and scratch across the ground, and I tell them how pretty they are. Their black feathers shine iridescent greens and blues in the morning light.

The chicks have not quite figured out how best to utilize their vocalizations and half the time are peeping like helpless chicks in a nest, a quarter of the time are screaming bloody murder, and a quarter of the time they are quite and happy as a clam. I still try to talk to them, even though I doubt they can hear me over their squawking. Eventually, we will get to know one another. Eventually, we will build a relationship of trust.

The chicks will learn to go into the coop at the end of the day. They will learn that in the morning, I will come with feed and scratch and if they stand still long enough, I'll give them a gentle pet.

Until then, I'll keep up the routine and hope that regularity fosters familiarity, which will foster trust. And for now, we end each day in a kind of Three Stooges routine of trying to catch little chicks out in the chicken yard before it gets too dark. 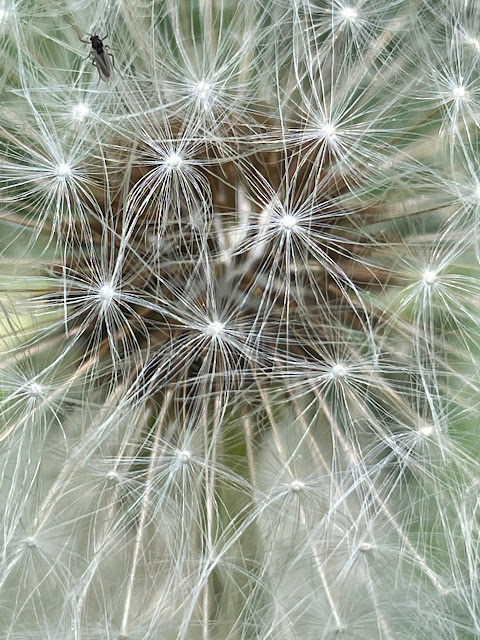 From Democracy at Work:

Economic Update: Valuing Work by Women of Color
On this week's show, Prof. Wolff discusses Bernie Madoff's $ 82 billion swindles and capitalism's incentives for swindling, the economics of wars in Iraq and Afghanistan, US government's racist housing policies, and refuting the defense of capitalism as "lifting people out of poverty." In the second half of the show, Wolff is joined by Professor Nina Banks to talk about economics and correcting the undervaluing of community building work by women of color.

All Things Co-op: Critiques of Co-ops
In this episode of All Things Co-op, Kevin, Cinar and Larry talk about some of the most common criticisms of co-ops that they've heard over the years and respond to them.

From the It Gets Better Project: We asked nine members of the It Gets Better Project family to share their thoughts on how to uplift and empower AAPI LGBTQ+ youth. Here's what they said!