After a relatively sedentary year of not much more than dog walks, I went on my first real rides of the year  this weekend. The e-bike experience is exhilarating and freeing. I was able to go for a 10 mile ride, and the next day a 13 mile ride, both heading over Cave Hill Road past the Leverett Peace Pagoda, and the Dakin Animal Shelter, down to the Leverett Library.

For most of the rides I stayed on the Eco setting, which is the lowest level of assistance, and only bumped it up to the second and third levels when I headed up the long steep hills, and of course turned it off while going downhill. Basically, what this means is that out-of-shape-Leo was able to keep up with his average speed for in-shape-Leo even with a giant hill in the way. I still felt like I was getting exercise, albeit, not at the full acoustic level. And on the last leg of the way home, I did try the turbo level on flat ground just to see how fast I would need to pedal to reach 27 miles an hour. It reminded me of riding a stationary bike when I was a kid, one where you could pedal as fast as one possibly could, or adjust the resistance until it was nearly impossible to make one rotation. And of course, it also reminded me a little of speeder bikes on the Star Wars planet of Endor. Especially bombing down hill at 37 miles an hour. My phone suggests I made 47 miles an hour, but I think that must have been an error. Cell reception in Leverett is spotty.

Oddly, the last week has also found me dreaming as I have not perhaps dreamed since the start of the pandemic. At least, I have not been waking up and remembering my dreams. When I have the wherewithal to think of it, I try to write down my dreams when I wake up. I used to have a dream notebook beside my bed, but these days I type it into my phone as best I can. It is strange how fleeting a dream can be, how one can lie in bed and be thinking of nothing except the details of a dream, and then you get up and brush your teeth and suddenly it is gone. There is just a void and maybe one or two vague inklings. Or nothing at all.

My first long ride was when I was in grade school or middle school and I was participating in a fundraiser for cancer research. It was one of those tedious things where you pester all your parents' friends with pledging a certain amount for every mile achieved. I had a little red 10 speed and rode that skinny tired bike all through that town, and on that particular day, rode 18 miles, if I remember correctly. Those were the days before I was considered any kind of athlete, I was just a skinny kid with a bike and I don't think anyone imagined I would ride the cancer circuit for so long, least of all my father who pleaded with me to stop on my final round, worried for my well-being (and probably exhausted and ready to go home). Before the days of GPS, cellphones, and bike computers, the only way to measure distance was to track it on a car's odometer, and so that ride is really the only ride where I knew how far I went until the post cellphone era.

In college I spent a summer studying at Trinity College in Dublin. I grew friendly with a woman from Arizona. At the end of the school session, some people headed home, but a group of us were staying behind to tour the country on our own. I had my backpack and a guitar, and she was heading on a bike tour where she was going to ride across the countryside for days. It seems like it must have been a wonderful and mysterious adventure, I had never imagined touring on a bicycle like that. In hind sight, I wonder if she had been hoping that I would join her. I remember the last time I saw her she was somewhat despondent in a pub waiting for the bicycles to be ready because the departure time had been delayed multiple times. I was heading west on a bus or train, and then was going to hitchhike from there. The idea of riding bicycles in a pack and being beholden to group departures seemed painfully dependent on others to my independent, albeit lonely, self. I hadn't quite imagined a desire for community and camaraderie at that point in my life. I wrote her several letters, probably too many, as I hiked around the west coast, and then up to Belfast, and then across into Scotland, England, and Wales. Along the way I deposited them in mailboxes I found in the little country villages. It was probably enough to frighten her parents. I don't think I heard from her after Ireland.

I don't know why certain people appear in dreams. It is surprising who makes an appearance, like a cameo in a movie. I wonder how much the mind draws them from the air and if the mind is also pulling from something beyond the self to bring forth the memory, the visage, the living likeness of an old friend, a colleague, an old love. What is happening in the world, in that person's life, that makes their presence important?

In all my days of riding a bicycle, I don't think I ever blew a tire until I started commuting to work. I must be mistaken because I remember my father with a patch kit and wiping soapy water on an inner tube to find the leak. I remember him teaching me how to find the hole and how to affix the rubber patch. But other than that, I don't remember really even paying attention to tires until I was an adult commuting to the college on poorly maintained roads and regularly making pinch flats by hitting large potholes too fast, one time getting a flat on both tires.

My most recent road bike has narrow, nearly smooth tires to reduce rolling resistance, so it is startling to be riding a bike with large commuter tires and an unabashed weight. I imagine some day these will be as svelte the street e-scooters you can rent and ride on the streets of Paris and Washington D.C. But for now, the trade off is a solid stability and a sense of steadfast capacity, at least until the battery runs out.

I dreamed that I was standing in the yard of my wife's old house in Laurel Park, an intentional community where the houses are close together and all share a communal yard. An old colleague of mine came stumbling from between two houses out of breath and staggering. I was struck with the similarity to a scene from Watership Down where one of the rabbits catches up to the traveling band and recounts the horrors he witnessed when the human developers came and poisoned the warren.

I suppose some of my former colleagues who are avid cyclists are shaking their heads in disbelief at my betrayal, but I do hope to return to my road bike, but only for joy rides with only moderate hills. I think I've found just the thing to make the return to in person work and its commute appealing and something to look forward to.

Sending you all peace, love, and healing,

I am thinking more about today's ruling and will write about it some time in the future, I am sure. But for now, I bow my head and wish George Floyd's family and friends a moment of peace. 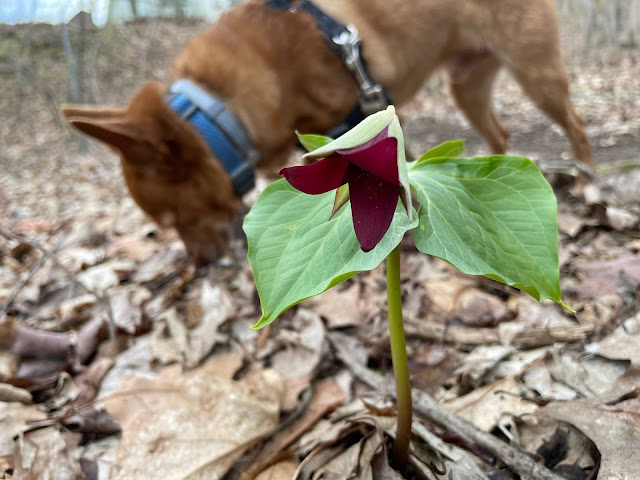