So, in my meditative tour of the 7 Deadly Sins, apparently the next stop is envy. It is a strange one, not what I would have expected to crop up second. But I suppose when I think about childhood unhappiness, it makes sense... and if we are shaped by our childhood experiences and they shape our neurosis as adults... then perhaps it is important to delve into.

I grew up in a suburb of Boston, first in Quincy, then in the much more affluent Weston. In both communities I remember us as one of the only non-white families in our neighborhoods. This set up a norm that was aligned with the representation of what it meant to be an American in books, on television and in the movies. As a child there was such a deep desire to fit in because these were the characters and people one admired and aspired to become,  and in the 1970s and 80s there was very little sense of how to maintain a strong sense of identity within the landscape of assimilation and othering, at least among Asians. It became a normalized aspect of my existence, to wish for the things I saw around me, things that I thought would affirm that I belonged in this country as much as anyone. In Quincy I went to a Jewish preschool in the basement of a synagogue and I remember asking my mother to buy me matzo bread for snack. It was the thing that everyone ate.

I remember my embarrassment in grade school at wearing Filene's Basement Jordache jeans and Keds sneakers, where the ever fashion conscious clientele demanded Levis and leather Nikes with the red swoosh. It didn't matter that I had no real sense of why I would want such things, except that kids that wore those sneakers or had Levis didn't get teased for their attire. That pressure to conform then shaped what became desire... which I interpret now as envy. I wanted to go from bus stop to school unmolested, to stand in line for gym without someone singing out the Jordache advertising slogan in a taunting way, "Oh, you got the look!"

Later, it was that same desire to conform that drove my desire to rebel against the stereotype of Asian middle school boys. I modeled my persona on the coolest of the cool. I read about Jim Morrison, Woody Guthrie, watched Clint Eastwood movies, and fashioned myself into someone who was a fearless risk taker, someone willing to push boundaries, to leap and see what would happen after. And even this seems like a form of envy. I wished I had the nonchalance and bravado I saw in my peers who didn't seem to worry about getting arrested, not doing their homework, or working off detentions with the janitors (where they would smoke cigarettes on an old couch in the loading dock).   I had none of this natural insouciance, it was all carefully shaped as a grand experiment in the creation of a persona, an identity that mimicked what I thought I saw in the cool kids, the ones who reeked with a degree of danger, the ones in the movies with jeans jackets.

Interestingly, I think it was this experimentation with identity that eventually allowed me to shape the person who I have become, the degree of detachment that I can utilize as an affect to hide the impact something has on me. I can pretend to move independent from disappointment, criticism, a questioning of my worth, a discounting of my identity, and I can make it appear that none of that matters to me because I am like Jim Morrison or Clint Eastwood, or I will write a song about it like Woody Guthrie. But the reality is that I am a far lesser human than the public personas of Jim, Clint, or Woody, or all those other passing role models. I'm a terrible drunk (I'm allergic to alcohol), a lousy shot (at least when playing video games), and I value my limbs too much to do more than daydream about jumping trains (a little tribute to Kurt).

It is easy to see a family that we think is ideal, to watch an actor or listen to a musician we think we can know by watching a movie or listening to a recording, but the reality is that envy is almost always misplaced. All families have the potential to implode, actors are practiced at hiding their own insecurities and fears, and musicians are really just very talented children.

What comes next is, you close your eyes. Breathe deeply. Take a moment for yourself.

Thank you for reading,
Leo

The entire Narrative Magazine library is free and open to the public if you want to peruse and access some good fiction, poetry, and non-fiction! 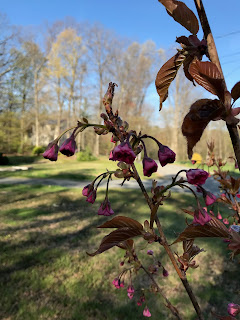 Join us for a panel discussion where leaders of online institutions and programs will share their guiding principles, best practices and helpful advice that those new to remote learning and instruction can apply this year and beyond.

Leo Hwang
Leo Hwang received his Ph.D. at the University of Massachusetts in Geosciences with a focus on the diverse community economies of artists and artisans in Franklin County, an M.F.A. from the University of Massachusetts at Amherst, and his B.A. in English and Fine Arts from the University of the South. His work has appeared in The Handbook of Diverse Economies, Human Being & Literature, The SAGE International Encyclopedia of Travel and Tourism, Route Nine, Rethinking Marxism, Solidarity Economy I: Building Alternatives for People and Planet, Meat for Tea, The Massachusetts Review, Glimmer Train Stories, Rivendell, Can We Have Our Ball Back?, Fiction, Three Candles, Gulf Coast, The Vermont Literary Review, and The Dickinson Review. He has taught at the University of Massachusetts, Amherst; Mount Holyoke College; Greenfield Community College; and Westfield State University. Mr. Hwang is currently the Dean of Humanities, Engineering, Math, and Science at Greenfield Community College. He also plays guitar in two bands, The Warblers and Vimana, and bass in the Original Cowards and The Big Why.